I don’t often talk about writing on this blog. I have nothing to tell you about writing and the process of writing that others don’t do better. I have a certain sense of confidence in regards to my visual art, confidence that generally eludes me in writing.

This is Christoph’s first scene. The tone is important to me in setting the scene and developing character.

Light came reluctantly through the grimy pane of the door at street level and picked out the edges of each step, all six of them, to the floor of the room Christoph called home. It laid a pallid patch on the rag rug at the bottom where his boots stood, side-by-side, their tops listing toward each other. If Christoph had not set them so carefully on the mat, if he had tossed them carelessly or just let them fall as they will, the holes in the soles would have been evident along with the cracks and breaks in the much-polished leather tops.

As though the struggle had already been too much the daylight petered out, not offering more of Christoph’s dwelling to the eye. It didn’t matter much. There wasn’t much more to see: a narrow iron bed in one corner, and a dresser he’d bought for a few Gröschen from a man standing ready with a sledgehammer to knock it into kindling. It slanted badly to the right and the drawers stuck until Christoph found a small block of wood to stand it on a more even keel.

Beside the dresser was his table. It held his pens, his notebook and a battered Stoewar typewriter, its ribbon so old it made ghosts of his words. He needed to buy a new ribbon. He’d meant to last week, but the editor had shorted him on a story because he’d submitted it handwritten.

Christoph sat on the edge of his bed and pulled his blanket tight around his shoulders. The recent spate of cold weather enjoyed his damp little cellar. He took his cane from the end of his bed, rose and took the few steps to the table, where he fumbled for his box of matches and lit the tiny paraffin stove, next to it. Only an inch of paraffin remained in its reservoir. So, what would it be, paraffin or a new typewriter ribbon? He sighed. It would have to be paraffin. His lame leg could not bear the cold and he could not give up his morning cup of tea.

He shook his kettle—there was water enough—and set it onto the stove then pushed on to the small water closet at the other side of the stairs.

The mirror, inexplicably, was fastened to the wall over the toilet and Christoph stared at his shadowed face as he released his bladder. A shock of over-long hair fell over his forehead obscuring one worry smudge eye. He shook himself dry, took the half step to the basin, filled it with the frigid water that came reluctantly from the spigot, gritted his teeth and splashed handfuls of the icy stuff over his face and hair. Blind, he groped for the thin towel hanging on a hook beside the sink and rubbed his face and head. When he looked again into the mirror a fresh colour disguised the pallor of his skin and livened his eyes.

He set his tea to steep, limped over to the door, picked up his shoes, made his way back to his bed and before sitting heavily on its edge, pulled his trouser from beneath the mattress and pulled them on. Christoph lifted his weak leg and swung it over his good knee, pulled on yesterdays socks and reached for his boot. He’d have to replace the paper in the sole tonight. It would be worn through by the end of the day, especially if it rained again. Foot encased in his shoe he reached for the steel and leather brace hanging at the foot of his bed. He placed the metal bit under the arch of his shoe and fastened the first set of leather straps at his ankle. A steel shaft came up on either side of his leg, hinging at the knee and extended to mid-thigh. Christoph stood, and buckled another set of straps just below the knee, and pull his trouser leg high, buckled the last at the thigh. Not bothering with his other boot, he walked in a short jerky motion to the table and poured a cup of tea.

He drank it while he continued to dress. He dunned his worn coat, tied a woollen muffler at his throat and put on the elegant leather gloves he’d been delighted to find among Frau Casal’s second-hand goods. Finally, he picked up the large envelope lying near the typewriter, opened it, perused the first few lines on the page, shook his head and pushed the papers back into the envelope. There was no time to rewrite and he doubted he could make it any better. With the envelope under his arm and cane in hand, he climbed the six steps to the door at street level.

The sun still shone, though it had abandoned his small window and moved on to accommodate other, more promising ones. Christoph sniffed. There was sunshine now, but there would be rain before days end.

The yeasty smell of freshly baked bread wafted across the street from Mme. Lemieux’s Boulangerie. His stomach growled and his mouth watered. Coffee and a fresh baked roll, what heaven that would be. He gave himself a shake. Not now. Maybe later, if there was anything left from his pay for this essay on the artistic merits of the new film by Liebeneiner.

He pulled up his collar and headed toward the city centre. It would take him almost an hour to walk there. By that time the offices of the Berliner Morgenpost would be open. Maybe he could talk that miserable editor, Kost, to read his essay right away. He entertained himself with the thought of having so much money that there would be enough for sausage to go with the roll. He would not order coffee. The tea was better. Food, paraffin and a new typewriter ribbon! What riches. So immersed was he in his daydream that he didn’t notice the group of brown-shirted youth crossing the street toward him.

“Out of the way cripple!”

Christoph lifted his head and froze in place.

When we visited the San Francisco Museum of Modern Art (SFMOMA) we were fortunate to see an exhibition by German modernist painters. It was a delight to see the work of a particular favourite,  Anselm Kiefer. These paintings are BIG. “Big paintings” are a particular hallmark of modernist art. I’m talking about physically big paintings, and not the quality of the work, though in the 1950s, 60s, and 70s, those two things were often conflated.

Seeing these paintings kicked off a desire to make large paintings ,again. When I was a student in the 1980s I created some very large paintings. Big Red, below, is 8 feet tall by 4 feet wide. The piece was created entirely of bits of paper and spills of acrylic paint. These paintings had no backing and you can imagine what a nightmare they were to hang.

When I began to paint in encaustic, my work became smaller in size. In Progress,  2013, encaustic on panel is about 40 x 30 inches.

This week I finished this egg tempera painting. It is bigger than the sketchbook, and alterbook works I’ve been showing you, but nowhere near as large as In Progress.

One more thing. A loyal reader, Regine, commented that the altered book paintings I posted  last week made her think of quilting. I don’t quilt, but I’ve long recognized that my work has an affinity with quilting. Here are two collage paintings from the 1990s that show a strong link to piecing quilts. 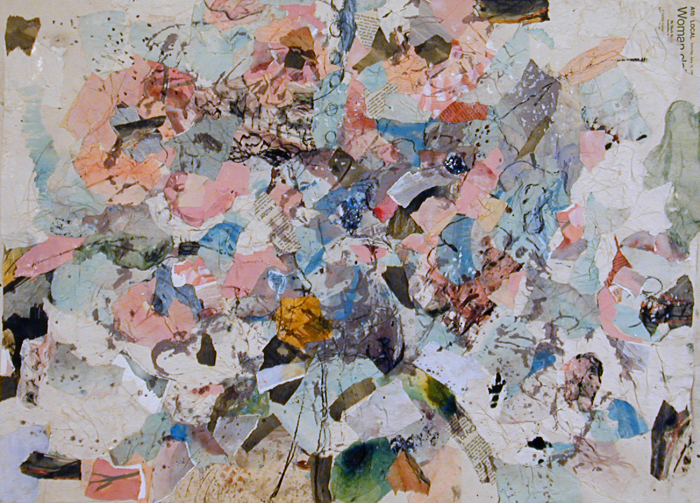 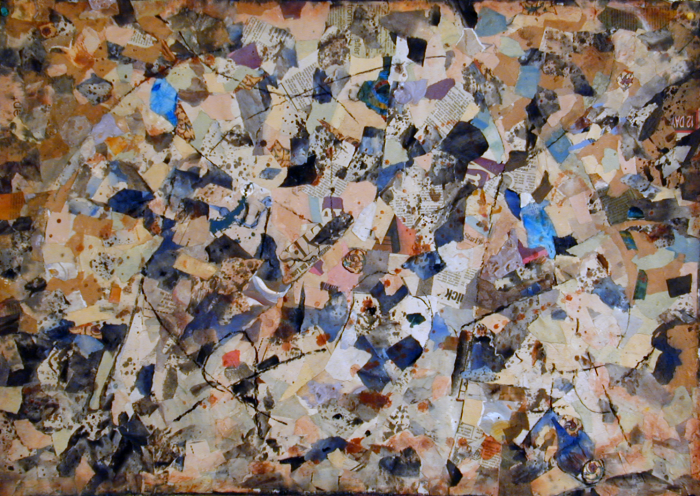 You know what’s funny? Size doesn’t matter with digital work at all, at least not in the three dimensional way.  If you have enough pixels you can see the work any size you want. Think of an iMax screen and your cellphone screen.

It’s not yet the end of January, and I’m already feeling a little behind. Yes, that’s right, we’ve barely begun the year and I’m out of control.

I write this in all seriousness, and then I think for a bit and laugh. When is a creative ever in control? Creative people scale high in the trait for openness. Everything is always negotiable until the painting is hung or the poem published, or the music played, and even then, we think: “What if we’d done this, maybe this, and…”

Now, add to that bit, the usual January goal setting. Yes, I know, I told you that I didn’t make any New Year’s resolutions and I didn’t, but for me, there are two times in each year—January and September—when I can’t help thinking, “New beginning.” And with that thought, I’m flooded with delight at all the possibilities. Soooo many possibilities, so many things I could make.

Three weeks later, I’m overwhelmed and out of control.

You can make lists, calendar plans, take webinars on how to better manage your time, and so on, but the single best thing I do is to take a big breath and hear the word STOP in my head. Then I let my shoulders fall. It’s amazing how relieved I feel.

For creatives, out of control is who you are, embrace it, take the day as it comes knowing you’ve been here before and you did okay. 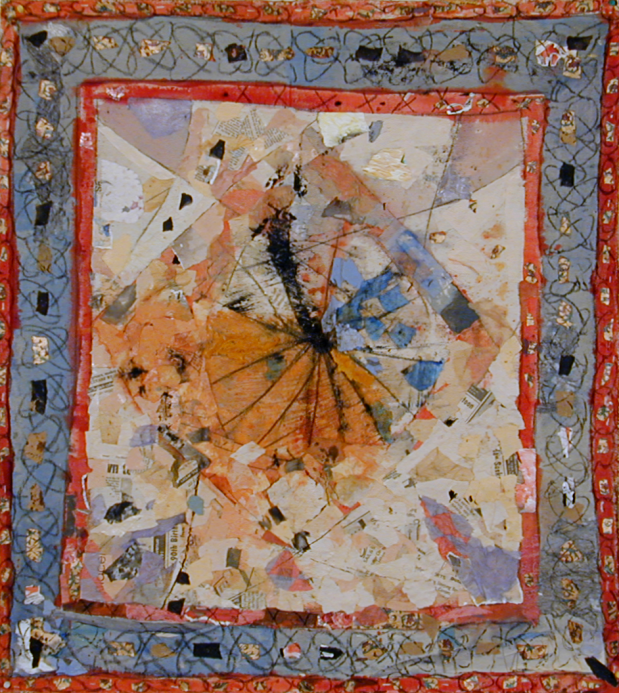 There was a period of time in my art life that I worked almost exclusively in collage. In the early stages it was partly because I couldn’t afford a  lot of art materials, and partly because I was having trouble with acrylic on canvas, which is what everyone else was using. Of course that isn’t what I told people. I told them I was doing the ecologically decent thing, and recycling.

The early collages were built entirely of bits of paper and pours of diluted acrylic paint, ink and whatever other medium came to hand. I would stick the bits of paper–newspaper, flyers, phonebook–onto a sheet of polyvinyl, and when the painting was dry, I peeled it away, creating a work that was one piece without a backing. Some of these works were very large–8′ x 12′. The problem was how to display them. As time went by I used canvas as a backing, allowing me to stretch the work on a stretcher.

Magic Carpet is approximately 3′ x 3.5′ and has a canvas backing. Funny how I like it so much better now than I did when I created it.

...about art, creativity, the mind, life, and writing.
Loading Comments...