Now don’t get me wrong. I like birds. I liked them a lot, but I also have a bit of a phobia about them flying near me, and to be honest, to hold a bird in my hand, warm, and frantic with its heart nearly knocking through its chest, well, that freaks me out too. I try not to give in to fears and phobias, but it doesn’t mean that they’re not still there.

Tuesday last, I’d went for my usual early morning walk. Nearing home, I heard a persistent knocking. I stopped and looked around. I saw no one about. Doors were closed, no hum of lawn mowers. Nothing. But there it was again the knocking. I glanced at an elm near by and almost missed it. Man, Spiderman has nothing on the Downy Woodpecker. It walked vertically up the trunk of the tree dispatching bugs as it found them. No, I wasn’t afraid. I was thrilled to see this incredible little bird so close up.

Breakfast done and cleared away I headed to my downstairs studio. I’d started a painting–yeah, me–and it was going well. I couldn’t wait to get back to it.

In a moment I was immersed. I had some podcast going, or perhaps an audio book by Peter Grainger, I can’t remember which. I heard something, but it came to me distantly as sound sometimes does when I’m in the midst of creating.

Again, louder, insistent, a scuffling noise, something banging on metal, Then silence.

My studio is off the family room. In the family room we have a Franklin stove type of fireplace. When we bought this house we were told that the installation of the fireplace was not up to code, meaning that the house insurance company said it’ll cost you big time if you plan to use that fireplace. So we stuffed the stovepipe with that pink fibre glass insulation to keep out the cold of winter and put an electric fireplace insert into the firebox. You know the sort of thing. Fake logs, fake flames created by some kind of light doing some kind of thing, and behind it all a heater to throw some warmth at you.

There is was again. The loud scuffling noise. Some knocking. It was coming from the fireplace stove pipe.

I call my husband at work. He pretty much said, “You’ll have to get it out. Put the dog and the cat into a bedroom. Close the door on them, then open all the outside doors, and remove the fireplace insert.”

Sometimes husbands aren’t as useful as you’d expect. I thought maybe he’d drop everything, rush on home, to take care of things while I cowered in the bedroom with the dog and the cat.

Big breath. I screwed up my courage, did as my husband suggest and pulled out the fireplace insert.

And nothing. No bird. A little pile of dirty pink fibreglas insulation lay at the bottom of the firebox along with–was that bird crap? Maybe it wasn’t a bird. Maybe it was a bat. Ha try again. I knew it was a bird. Somehow, there was a bird in the stove pipe and it was above the fibreglass stuffing. I got a flash light and tried to figure out a way to solve this. maybe I could pull out the insulation, but if I did that, I’d pull the bird down on me. I stuck my head in the firebox and craned to see what I could see. Nothing. I could see nothing at all. Nothing save a black hole. I needed help for this job, and that poor bird would have to wait until my husband came home. He’d put the insulation into the pipes and he surely knew where he’d put it.

I took the dog for a walk. I couldn’t bear to stay in the studio and listen to that it try to knock it’s way out of it’s sheet metal prison.

About mid afternoon, I heard a ruckus downstairs. Not the bird surely, this was more noise even that it could make.

Oh my God! The cat was in a panic. The dog started to bark. A large–I mean not your wren or your sparrow, not even a robin sized bird, but a BIG bird was fluttering around in the firebox, stopping now and then pausing to cling to the mesh firescreen.

I called off the dog, grabbed the cat and put them both into a bedroom, closing the door on them. I ran around closing the doors to every room that had a door. I opened all the outside doors. Then cautiously I went back down the stairs. Yes, it was till there, it’s yellow tail feathers spread, its chest heaving. I took a small blanket from the couch. My intentions were to throw the blanket over the bird, pick it up and put it outside. Cautiously I pulled back the fireplace screen. In flash the bird was past its edge and in the air.

Stupid, stupid me. I should have closed the window shutters. It slammed hard into the window. Its poor beak was seriously bent out of shape. Again I tried with the blanket, and this time I caught it. Darn good thing, because I don’t think either of us could have taken much more.

Holding it as gently as I could, still in the blanket, It carried it outside. My intention was to set it on the lawn. Its feet never touched the ground. Zoom! It was gone.

So okay, I guess it wasn’t a HUGE bird, but it was pretty big. It turned out to be a Hairy Woodpecker and I’m happy to report that before it zoomed away, it’s beak looked okay again. I guess they’re used to hammering it against things. 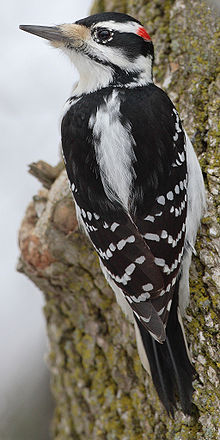 Phew! Two close encounters in one day. I may yet get over this phobia.

View all posts by evebarbeau

2 thoughts on “For the Birds: A Story”